We PETITION to WARN the DNC SUPER-DELEGATES re our Vote (also in down-ballot races) in Nov. 2020! 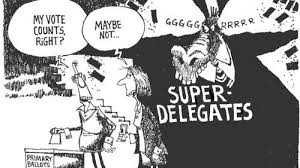 WE, The People (undersigned), DEMAND our "democracy" to be HONEST -- and quit serving money and power.

That the "Democratic" National Committee (DNC) adopts one of the following two DEMOCRATIC options:

1) EITHER, un-elected super-delegates be ELIMINATED from voting at the 2020 Democratic National Convention,
2) OR, the votes of such UN-ELECTED super-delegates be awarded to each of the remaining candidates, in the same proportion as the total number of ELECTED delegates he/she has EARNED (through our votes) in the Democratic primary elections and caucuses.

HERE IS WHAT WE (the undersigned) WILL DO IN RESPONSE:

I- IF the DNC heeds our HIGHLY DEMOCRATIC demand, above, we will happily do our best to un-seat Trump in November (and help elect Democrats in "down-ballot" races), regardless of who becomes (HONESTLY, i.e., DEMOCRATICALLY) the Democratic nominee for President this summer.

IF the UN-DEMOCRATIC "super-delegates" of the (so-called) "Democratic" Party’s (corporate) establishment undermine our votes this summer at the DNC Convention (again, as in 2016) but this time beyond the first round of nomination balloting,

a) EITHER will not participate in November 2020 Presidential vote--also affecting "down-ballot" races,

b) OR if we (again--like in 2016) find ourselves having to choose between the "lesser of two evils," although we MAY still vote (HIGHLY RELUCTANTLY--holding our collective nose), but such a vote will obviously NOT have any of our dedication, enthusiasm, energy, and the kind of popular-movement massive grass-roots electoral mobilization that is NEEDED to un-seat Trump--and again, such a DNC-caused voter apathy will surely (also) affect "down-ballot" races, including for the House and the Senate.

WE (the undersigned) SINCERELY HOPE--AND DEMAND--THAT THE DNC LEARN THE HORRIBLE LESSON OF 2016, AND TAKE THE DEEPLY DEMOCRATIC WARNING OF THIS PETITION SERIOUSLY!

By signing, I authorize Moji Agha / Jim Blok * Vote Guardians of America (VGA) to hand over my signature to those who have power on this issue.