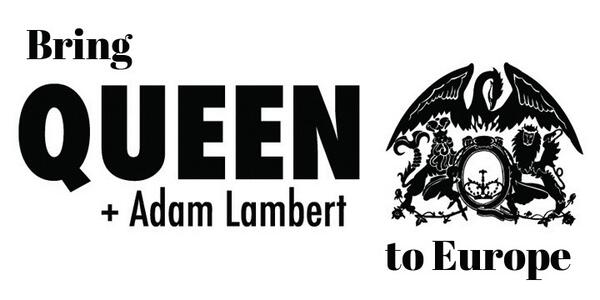 We, Emke and Carolien, Dutch fans of Queen and Adam Lambert, desperately want Queen and Adam to come to Europe with their summer tour and we are certainly not the only ones. Impossible? Not really. We believe we can actually make this happen! By getting as many signatures on this petition as possible, we can provide their managements with factual information as to how great the demand for European concerts actually is! Bring Queen and Adam Lambert to Europe by signing this petition and YOU might get the chance to see this legendary rock band live for one last time!

For further information, read on below:

Queen and Adam Lambert kicked off their summer tour across Northern America on June 19th and it will take them all over the Northern American continent. Then, in August, they will do a handful of concerts in Australia and in-between they will attend the Summer Sonic festivals in South Korea and Japan.

Now, Queen has their origins in England, and, during the time Freddie was still alive, they were most famous in Europe (compared to their fame in the rest of the world). Therefore, it would be logical for them to add at least a couple of European shows to the tour that is already being described as a once in a lifetime experience. Also, this might be Queens last tour -ever- as a band.

It is true that, in 2012, Queen and Adam Lambert actually did a small „European” tour. We put European between quotation marks for a reason; unfortunately the vast majority of European countries was left out from this tour. They did precisely six shows; one in Russia, one in Ukraine, one in Poland and three in London.

This is obviously not fair, but you can make a change! We think they might be highly unaware of the demand there actually is for a European tour. So sign this petition to show that YOU want this legendary rock band with Adam Lambert as their vocalist, to come to Europe! Show them you want this! Include your name, e-mail address and location, so we can keep you updated!

Unfortunately we do not yet know how many signatures we need in order to convince the decision-makers, but we believe there is no such a thing as too many signatures, so share this with everyone you know!

Disclaimer: we cannot force anyone to do anything, so there is always the chance that this petition does not have the desired effect, however; don’t let that idea stop you from signing this petition!

Adding your location is important for demographic reasons, we need to know which countries have the biggest demand for shows.