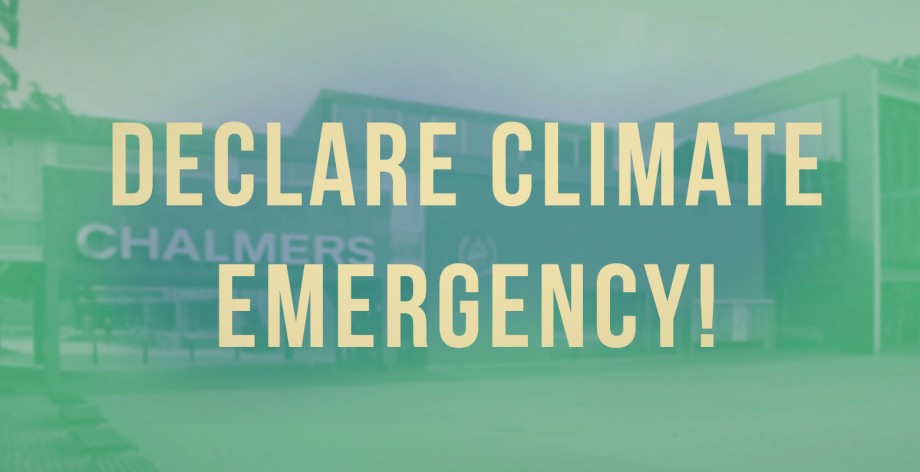 The Pope, former UN secretary general, leading climate scientist – voices are being raised across the globe to acknowledge the crisis we are currently in. Bristol University recently became the first academic institution to declare emergency, we urge Chalmers to follow.

Chalmers University of Technology should:

1. Declare climate emergency
2. Communicate to all student and staff why this is necessary
3. Act accordingly

Declaring emergency won´t solve our problems, but it could help form a collective will to actually try. A first step towards action is to admit the crisis which is already here.

Let´s take a stand, together.

For a sustainable future
Avancez

Do you want to know more about why we are doing this?

We have presented three major concerns to the management.

Keep scrolling and you will find them!

The sum of all national commitments amount to more than 3 degrees of warming.

Nations appear not be able to hold their commitments, global emissions are still rising.

Models are based on future developments of systems to capture huge amounts of Co2.

Models are based on just 66% certainty, at “secure” levels significant risk of collapse remains.

Source: Emissions are still rising: ramp up the cuts, Nature

2. Risk of systematic underestimation of the IPCC

The IPPC tend to a conservative logic with a long time delay to include new research.

Significant risk that the basis for targets and commitments is insufficient.

Source: What Lies Beneath - The Understatement of Existential Climate Risk

3. The universities are not doing what is necessary

University emissions are not decreasing.

Our experience is that universities do not communicate the serious issues stated above.

Our experience is that most staff do not have knowledge of issues stated above.

Future mitigation should address all points stated above.

We conclude that the universities are not securing the future of its students.

We have given Chalmers until the 14th of May to consider this proposal. Climate emerency must be declared before the end of this semester.