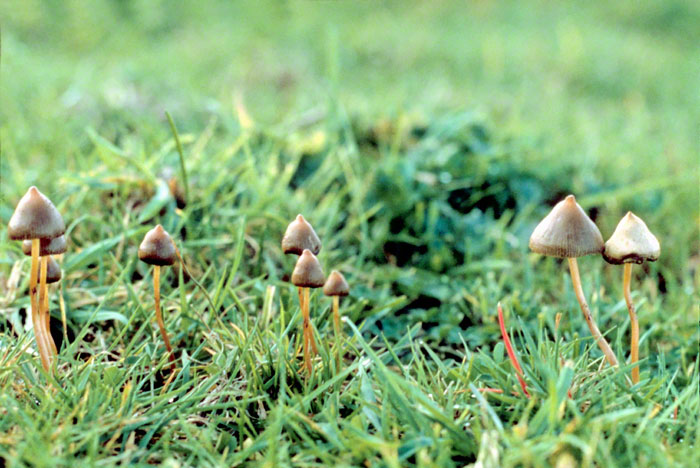 Europe's strongest hallucinogenic mushroom, 'Liberty cap', are thriving in Denmark. The mushroom contains the psychoactive compound called psilocybin - a so-called psychedelic substance - which recent research indicates has a huge potential for treating depression, as well as helping people out of their nicotine and alcohol dependence.

It stands proud out there, swaying in the Danish mole, in the woods and on open plains. The fungus is the strongest of its kind in Europe. And in these autumn days, mushroom hunting Danes walks around with their heads in the grass to find the little sponge.

Although the small bell-shaped mushroom is freely available in the Danish mold, thousands of Danes are turned into hardcore criminals when they pick the small and innocent looking mushroom. The liberty cap mushrooms has since 2001 been illegal to pick and be in possession of [1]. The official cause: High risk of 'bad trips' and poisoning.

This reason, however, receives major criticism from researchers and drug activists.

The history and potential of the mushroom

Psilocybin mushrooms have been used by various cultures for thousands of years [2]. Until the mid 20th century, the context was ceremonial and spiritual. Most famous for its use of the fungi is the Mazatecs, a people belonging to the southern Mexico. That all changed on June 29, 1955, when the Vice President of JP Morgan, R. Gordon Wasson, traveled to Mexico with a photographer and met the medicine woman, Maria Sabina, and became "the first white men in history to ingest the divine mushroom." [3]

Then followed the hippie movement of the 60's and their hefty and sometimes irresponsible use of psychedelics like LSD, Mescaline and Psilocybin. A few years later, all of the classical psychedelic drugs were prohibited and the emerging science into the drug's therapeutic potential was shut down.

Now almost 50 years later, the research has been reopened and scientific articles on the subject are published as never before. The promissing potential of psilocybin in connection with psychotherapy are documented in studies at the Imperial College London and Johns Hopkins University in Baltimore.

Here it is being investigated how psilocybin can be used in treatment for treatment-resistant depression, anxiety, addiction and PTSD. Research shows that just a single dose of psilocybin can lift anxiety and depression for up to six months or longer [4].

In addition to the therapeutic potential of the mushrooms, studies indicate that they can help people become calmer, happier, friendlier and more open minded. [5][6]. The psychological effects of the fungi are so appealing that in spite of their current legal status and decades of scare campaign, about 100,000 Danes have tried to consume them at least once in their lifetime, and it is estimated that over 10,000 Danes each year pick or otherwise acquire the mushroom. [7]

Psilocybin is, opposite alcohol, non-toxic to the body [8] is not addictive and has not been shown to have any adverse effect on long-term mental health when used responsibly [9] (in fact, they can be directly beneficial in this regard [10]). They can be grown anywhere and in such a way that does no harm to people or the environment. Psilocybin-containing truffles are sold vigorously in the Netherlands without any negative consequences [11].

As citizens in an open, democratic and rational society, we urge all relevant bodies to consider the facts presented and take steps to decriminalize the possession and distribution of psilocybin mushrooms.

Watch the video 'Magic Mushrooms and the Healing Trip' from the American magazine The New Yorker.
https://www.youtube.com/watch?v=am12fHnOhXQ

Casper Berdin Møller, The Psychedelic Society of Denmark    Contact the author of the petition

By signing, I authorize Casper Berdin Møller, The Psychedelic Society of Denmark to hand over the information I provide on this form to those who have power on this issue.