To the Minister for Major Projects and Minister for Transport, Jacinta Allan MP, in the state of Victoria, Australia. 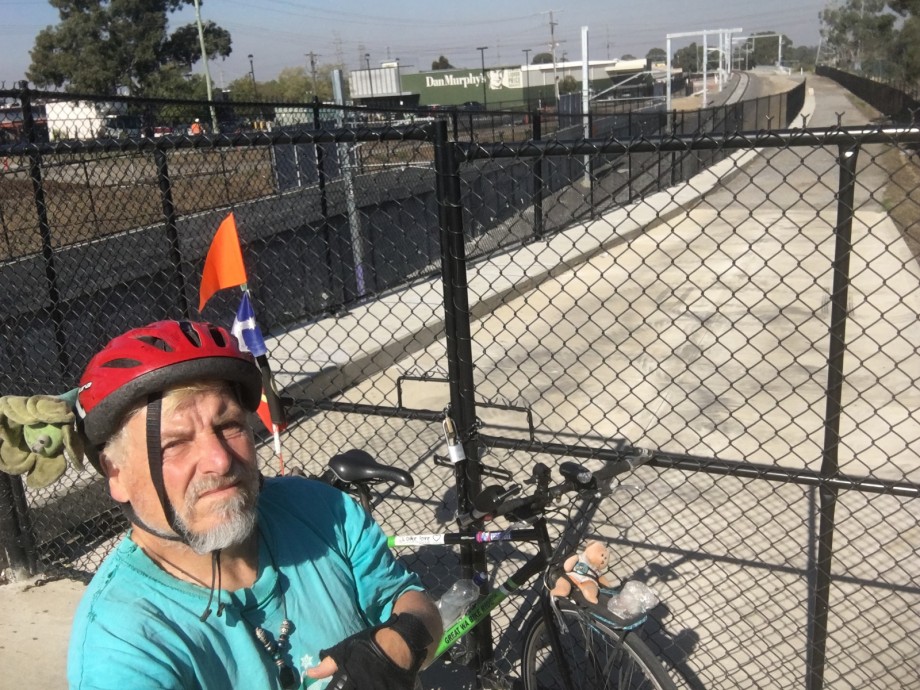 Photo: John Englart outside the locked gate at Camp Road bridge. Formerly the public had informal access from Camp Road to the Western Ring Road Path via the VicTrack access road and M80 rail bridge. We are now locked out. This is where the unexcavated culvert for a cycling tunnel under Camp Road would start requiring digging up the present concrete path.

The Upfield Transport corridor in Melbourne's northern suburbs is a designated strategic cycling corridor. It is well past time the Upfield shared use bike path was extended to Upfield Station.

Currently the Upfield Bike Path is a major arterial cycling path for the northern suburbs of Melbourne starting at Park street in Brunswick, following the Upfield railway line through Brunswick, Coburg, Merlynston, and curently ending at Box Forest Road in Fawkner.

The path needs to be extended from Box Forest Road to join the Western Ring Road Path, then over the M80 rail bridge, across Camp Road and follow the railway line to Barry Road and Upfield Station.

The completion of the Upfield bike path has been advocated by both Moreland Council and Hume Councils for the last decade as part of their pedestrian and cycling strategies.

We have waited too long for the Upfield shared use Bicycle Path to be extended to Upfield in Melbourne's north. It needs to be built, not left to future politicians and bureacrats.

The Level Crossing Removal Authority should have built the Upfield Bicycle path extension as part of the Camp Road level Crossing Removal during work in November 2017 to January 2018, as specified under Section 1.7 of the Transport Department policy document: the Victorian Bicycle Strategy 2018 - 2028.

It is unacceptable to simply abandon cyclist requirements and call it 'future-proofing' as part of this major transport project.

This effectively leaves building the path up to the competing demands and prioritisation of Vic Roads limited budget for new cycling infrastructure, which may involve several years before funding is available, if ever.

It is even more galling when residents of Moreland and Hume in safe Labor seats get 'future proofed', while we see residents in marginal seats along the Dandenong-Pakenham line, the Frankston Line, and the Mernda rail extension get new cycling infrastructure as part of level crossing removal. Some call this pork-barrelling.

What needs to be done by the Level Crossing Removal Authority under the authority of Minister for Major Projects and Minister for Transport Jacinta Allan MP:

The petitioners call upon the Minister for Major Projects, Hon Jacinta Allan,
to hold the Level Crossing Removal Authority accountable for following the Government’s transport policy, and construct the Upfield Bike Path from the Western Ring Road Path, over the M80 rail bridge and to the north side of Camp Road as it was required to do so under Section 1.7 of Transport Department Policy document: Victorian Bicycle Strategy 2018-2028.

The petitioners also call upon Vic Roads to:
give a hight priority for funding to resolve the dangerous conditions for cycling through Campbellfield,  to build the path in conjunction with Moreland Council from Box Forest Road to the Western Ring Road, and with Hume Council from Camp Road to Barry Road, without delay. 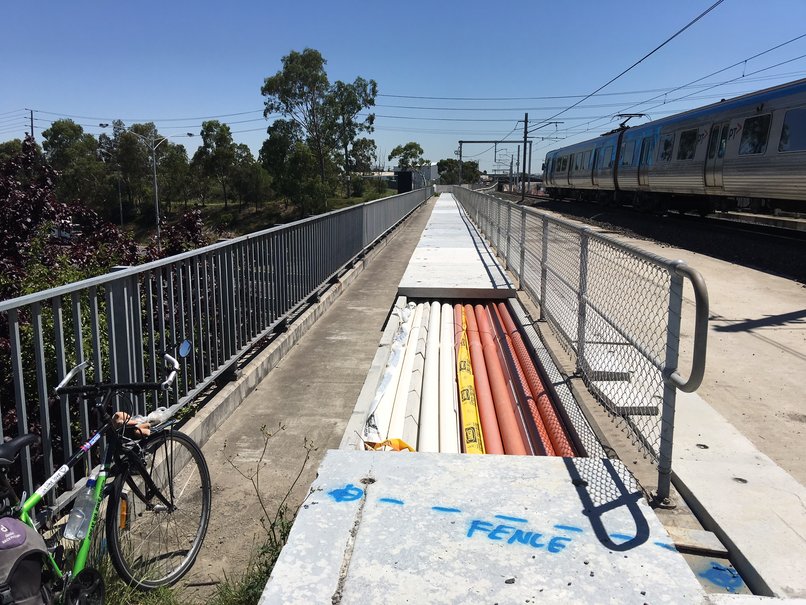 Photo: the cemented rail cabling on the M80 rail bridge in the portion nominally reserved for future pedestrian/cyclist use. Was this poor planning and design? LXRA said a cycle path can be built on top with addition of a platform next to the cabling and extension of the safety fence on the rail bridge, but have not constructed this.

This is non-peak hour traffic on Sydney Road/Hume Highway at Campbellfield. There are no safe, direct north-south cycle routes provided by Vic Roads through Campbellfield, which should be more than adequate reason why priority should be given to funding the extension of the Upfield Bike Path to Upfield, and for the Minister for Major Projects to ensure the Level Crossing Removal Authority constructs the path from the Western Ring Road Path to Camp Road.

John Englart, Extend the Upfield Bike Path to Upfield Campaign    Contact the author of the petition

By signing, I authorize John Englart, Extend the Upfield Bike Path to Upfield Campaign to hand over the information I provide on this form to those who have power on this issue.