This is the hate crime Presidential candidate and South Bend, Indiana Mayor Buttigieg doesn’t want to talk about. In 2011 black High school student Jiha’d Vasquez was found hung from a power line support after missing for four days KKK style in South Bend. Although the day he was reported missing he had been in a fight with a white student at school over a IPad which the white student claimed was his, (which was in fact Jiha'd's) after he was found hung, the police “investigation” lasted approximately an hour. His backpack lay at his feet but his Ipad was missing. The white student was not contacted. Hours after his body was found he was cremated. There was no autopsy because the then Coroner Chuck Hurley (who Buttigieg later appointed as interim Chief after demoting the black Police Chief in 2012) told Stephanie Jones mother: he knew what a suicide looked like, and she could not afford to pay for it. He did not allow her to view the entire body and refused to give her Jiha'd's clothing. She was not allowed to see crime scene pictures. The Coroner was not a trained Medical Examiner. In fact he had been fired from his position in the Notre Dame University Police Department for allegedly covering up an investigation (later in 2015 as Coroner he ordered the autopsy at County expense for a white female student that committed suicide in her Dorm Room). A KKK leader attended the funeral UNINVITED. Mayor Buutigieg, who was not in office at the time, was asked by Stephanie Jones at a City Council meeting in 2012 to investigate. He gave her his card and asked her to call. She did and has never gotten a follow up call. Several so-called community leaders have asked Stephanie not pursue an investigation because of the negative attention it would bring. She has been harassed and threatened. On Saturday, September 14, 2019, from noon to 2 pm, Doulos Chapel, 608 South St. Joseph Street, South Bend, Indiana, will host a memorial service for Jiha’d Vasquez, with guest speakers  and musical selections. Independent Investigative Reporter Jeff Harrell wrote the story and Young Turks investigative reporter Jonathon Larson aired the story and will followup.  Stephanie Jones deserves justice for her child! 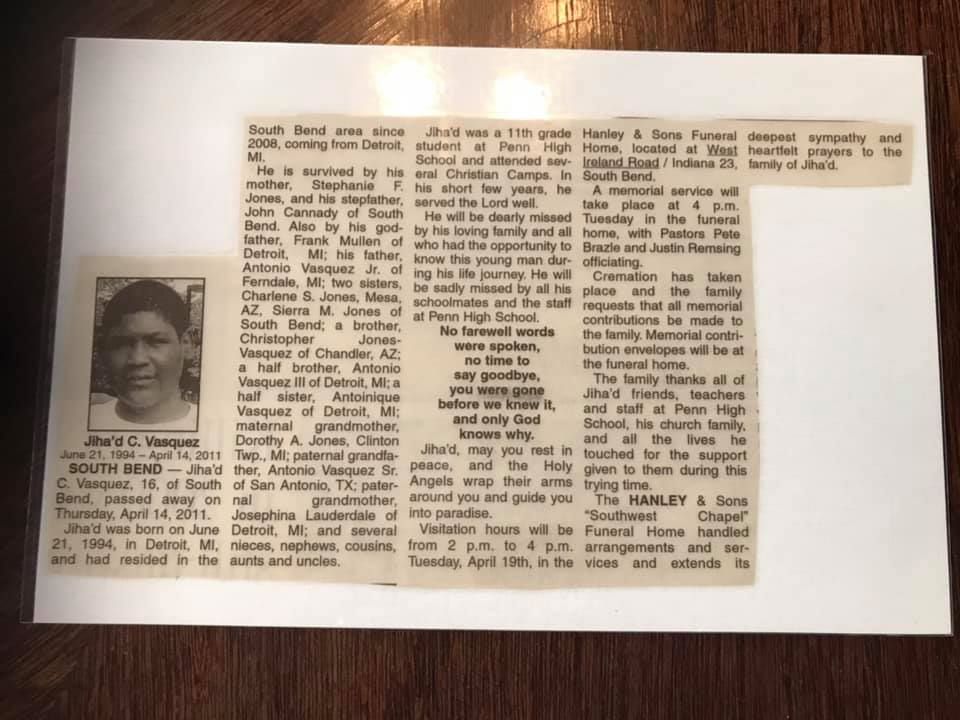 By signing, I authorize Pastor Mario Sims, Senior Pastor Doulos Chapel to hand over my signature to those who have power on this issue.