Justice for the 'Dog with no Name' 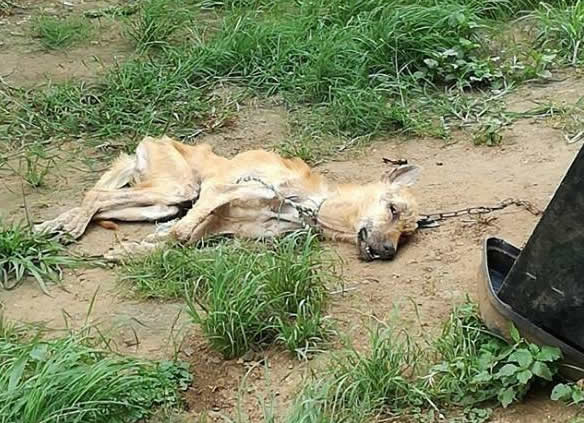 If you love animals – or are simply a decent, compassionate human being – please add your name to our petition to demand justice for the dog that starved to death at the end of a chain, in plain sight of its uncaring owner.

This was not a stray or abandoned animal. It was kept like this on the owners’ property, literally withering away to skin and bone in front of their eyes. They could have brought it to the SPCA – or at the very least turned it loose so it could try to scavenge some scraps from the rubbish. Instead they simply left it to suffer for months until it died.

By the time our Inspector Ramsamy was alerted by Marc Chetty of Animal Rescue KZN the dog was already dead. Chetty took the photograph and left the premises with a second dog, also in very poor condition. The owner then tried to conceal the crime by removing the chain and burying the dead dog in a shallow grave. Inspector Ramsamy insisted on exhuming the body for post mortem examination by our vet.

The vet’s report is chilling: “The dog was in very poor condition and extremely thin, with no noticeable muscles covering the bones, owing to chronic starvation. All bony prominences were visible, the skin was very fragile and tore easily, and sores were developing on the pelvis. He weighted a mere 8.8kg.”

Because of the severe muscle loss, the dog would have most likely been lying in one position for a long time not able to get up until he died … just waiting helplessly for the suffering to end.

The Durban & Coast SPCA is outraged by this callous case, and has laid charges of animal cruelty against the dog’s owner in terms of the APA (Animals Protection Act). But we need your help to demand justice for the ‘Dog with no Name’.

It’s too late to save him, but we can make sure he didn’t die in vain, by sending a clear message to those responsible that crimes against animals will not be tolerated. Too often, culprits in these cases get away with a mere slap on the wrist. It’s time for all of us to speak up for suffering animals and act to prevent this from happening to any other animal, by insisting that the maximum sentence – a fine of R60 000 or 3 years imprisonment – is imposed.

Please add your name to our petition, which will be handed over to the magistrate at the Phoenix Court. We need 2 000 signatures before the case goes to court. So please ask your friends on social media to join the fight for justice for the ‘Dog with no Name.’

Durban & Coast SPCA    Contact the author of the petition