NO FLY ZONE OVER UKRAINE NOW

American Ambassador to Can      His Excellency David Louis COHEN (M)

AMBASSADORS TO CANADA FROM EUROPE & “THE WEST”

“THE WEST” FROM PUTIN 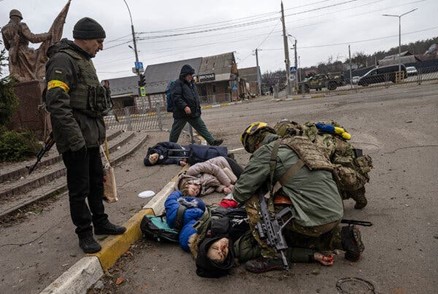 The soul of the Ukrainian Child targeted for death by Putin’s mortars in the picture asks:

“Mommy-Daddy: When does allowing or letting the commission of War Crimes happen to non western Ukrainians like us become a War Crime worth preventing?”

As we make our way through Day 24 ….. anticipating Day 25 much differently than Ukrainian children It is worth considering negotiating with Putin (China Iran North Korea) in a language he understands and “respects”.

Thank you for your consideration

It is in the best interests of democracy, the free world, and the children of Ukraine that governments of "the west" either, #1 supply the Ukrainian military with more than adequate aircraft and air defence to protect civilians

#2  institute and use their own aircraft to enforce a no fly zone over Ukraine.

The Responsibility to Protect under the UN Charter does NOT constitute actual escalation, no matter what spin the Russians put on it.

The UN Charter states: “In paragraphs 138 and 139 of the 2005 World Summit Outcome Document (A/RES/60/1) Heads of State and Government affirmed their responsibility to protect their own populations from genocide, war crimes, ethnic cleansing and crimes against humanity and accepted a collective responsibility to encourage and help each other uphold this commitment.” Article 51 of the Charter of the United Nations enables UN member states to collectively fulfill this historic commitment: “Nothing in the present Charter shall impair the inherent right of individual or collective self-defence if an armed attack occurs against a Member of the United Nations, until the Security Council has taken measures necessary to maintain international peace and security.”

Be it further resolved:

-that Putin has already  declared war on the citizens of any democratic countries  wishing to support an individual country’s democratic right to self determination, and by threatening to attack aid convoys.

- that more civilian Ukrainian casualties than Ukrainian military casualties is again Putin’s terrorising tactics against civilian populations.  These horrors are well known from the history of Putin’s indiscriminate leveling of the cities of Grozny, Aleppo, and his use of chemical weapons in Syria.

- that “the west’s” has continually unanswered or not acted with appropriate deterrents to Putin’s multiple attacks, through identifiable direct and indirect military means, and through volumes of documented undemocratic acts of destabilisation of in Ukrainian and westerns states.                                                This has been tacit approval for Putin to continue his stated goal of reassembling the USSR from the now self determined independent countries that made up the USSR prior to 1989.

- that if "the west" and Nato allow Ukraine to be choked to death in front of the world, that NATO in particular is clearly a failed organization.

- that the west’s attempts to reverse this historic and very consequential  inaction will undoubtably be met with accelerated aggression by even more inhuman tactics from Putin through chemical, biological or very possibly nuclear actions.  The consequences of the defence of Ukraine (the west )  will be massive for all citizens of the world.

- that these justifiable actions by the free world, and the very real consequence to humanity will be the not disappear and will be the same if  undertaken today, tomorrow, one month, or one year from now.

- that if Putin threatens that you "don't do something", there is no better indication but that you should do exactly that....now

- that the evidence of the chemical attack in Salisbury England in 2018 was an act of war by Putin on a NATO country. The fact that Putin’s assassin’s disposal of the nerve agent came very close to killing thousands of Britons.

- That the world is beginning not to be able to watch the daily horror and turn their attention away from 20 senseless days of this, which Putin counts on, and maybe even western leaders too now.

- That by supplying the Ukrainian air force with more than sufficient air assets, or by the west using their own air forces  to protect their defenceless citizens  “the west” is adhering to the UN Charter and clearly not declaring war. That Putin’s reaction will be the same if this were to happen today, tomorrow or in the future.

-That it is now plainly and critically strategic that Ukraine under NO circumstances be allowed to  fall under the military occupation of Putin, as the message this would send to other countries wanting to invade their neighboring states would create an unending series of similar “military interventions.”

-that “the west” meets as equals with,  and be worthy of, through immediate no fly actions support Ukraine’s wishes and determination through the shedding of their blood to be part of “the west”.

-That democracy is worth defending at the ultimate cost. The cost that our mothers and fathers, grand and great and  grand parents paid in the second world war was not in vain.

THEREFOR it is my request, that on my behalf that as "leaders of the west" you undertake a NO FLY ZONE with regards to Ukraine’s airspace, in the defence of Ukraine, their children and democracy ...today.

Warren Ham , citizen of Canada    Contact the author of the petition

By signing, I authorize Warren Ham , citizen of Canada to hand over the information I provide on this form to those who have power on this issue.