No language, no life 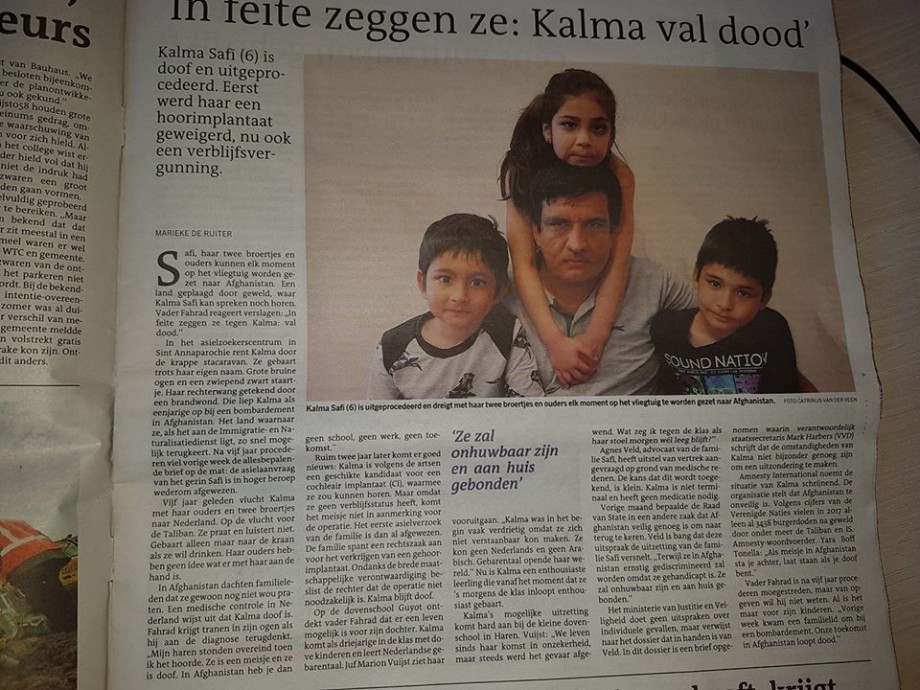 No language, no life.

We would like to draw your attention to a story which is of great concern to us.

Imagine having fled your home country with your partner, two sons and a one-year old daughter and you have requested asylum in the Netherlands. The years have passed, and your daughter is now six years old. You have also discovered that she is deaf. Over the past three years she has had the opportunity to learn the Sign Language of the Netherlands and she is thriving. Only now you have been informed that you’re asylum request has been turned down. The Dutch government says that your home country is safe and your family has to return.

Which country? Afghanistan. Safe? For Kalma, this six-year-old girl, Afganistan is not a safe place. Because she is a girl, because she is six years old, but most of all because she is deaf. Kalma does not know the language spoken in Afghanistan, she only knows Sign Language of the Netherlands. She does not have good prospects. The country is not as safe as the Dutch government would like us to believe. For a girl who cannot hear anything and who doesn’t have access to the local language, it’s nearly impossible to recognise danger. She will be dependent on what others do for her. If people panic, they will not stop to think of a deaf child in the neighbourhood that they don’t know. Kalma will have to fend for herself. Is that something we can ask of a six-year-old? Kalma depends on what she can see. But what horrible scenes will she be witnessing in the next years, without having anyone to talk to?

Any parent’s greatest fear is that something will happen to their child. Even in the Netherlands, without being in the middle of a war, parents worry. We, parents of deaf and hard of hearing children even more so. The risk that something will happen to our children is simply greater. Imagine the risk in a country that is in the middle of a war, and the amount of worry this will cause parents of a deaf child who only knows SIGN LANGUAGE OF THE NETHERLANDS (NGT).

We have known Kalma from the moment she started school at the Guyotschool in Haren, a school for deaf and hard of hearing children. Back then, she was a shy but curious three-year-old girl. We have seen her thrive. Only now can she finally hold her own against the other children.

We are thankful that the Dutch government has made it possible for deaf children to thrive by using sign language, including Kalma, who came to this country against the odds. But this same government now tells Kalma ‘Sorry, good on you that you now know Sign Language of the Netherlands but you are not allowed to stay here. Go back to Afghanistan, the country you and your brothers don’t know at all. A country that’s not safe. How you are to communicate is not our problem.’

Right now, Kalma is carefree, as she should be. But she will change, even faster than her brothers because she will not be able to recognise danger and will only be able to communicate a little with the members of her family. In the Netherlands, Kalma has a chance to have a good and secure life. She will have the opportunity to receive an education and grow into an adult with friends who speak the same language: Sign Language of the Netherlands. She can thrive and become a stable person. She has a chance here to build a life and be a successful, contributing member of society. All children deserve this chance. Kalma does not stand a chance in Afghanistan. Why not give her and her family a place in our country? Kalma has spent her early years, critical for language acquisition, in this country. Seeing that she has now acquired a language, we cannot now say “Good luck and farewell, little girl.”

Please sign the petition and help us give Kalma a chance.

Group of parents Guyot    Contact the author of the petition

By signing, I authorize Group of parents Guyot to hand over the information I provide on this form to those who have power on this issue.