May France want to restitute to Senegal the Oumarian library undiminished !

Letter to the President of Senegal, His Excellency Macky SALL

The discourse of your French colleague about the will of France to return to the peoples victims of colonization their stolen cultural objects is quite clear :
"I pledged that, within five years, conditions will be met for temporary or definitive return of African cultural heritage into Africa".

The missionaries he appointed to do the job, Felwine Sarr and Bénédicte Savoy, suggested to him in their report "... to satsify requests for restitutions concerning the objects seized ...". Besides, they prescribed a restitution in two phases. As far as Senegal is concerned, France must agree to return, in the period going from November 2018 to November 2019, the sword of El Hadj Oumar El Foutiyou as well as necklaces, pendants, pearls and medallions. “The other pieces (manuscripts in the National Library of France) of the Ségou treasure, could be returned or digitized, if the Umar Tall family agrees to that, in the 2019-2022 interval”

While the "Report on the Restitution of African Cultural Patrimony" is not enthusiastically received in France, it is the subject of much interest among most Africans. However, the text raises a lot of controversy. Its grey areas, the preconized bureaucratisation of the restitution procedures, as well as the uncertainty over French legislators’ willingness to amend their Heritage Code, cast serious doubts over the plans of the French President, Emmanuel Macron, to return to Africans their cultural heritage undiminished.

Hesitation to restitute the scientific works
Mr President,
If the above report has surprised and raised reservations on the part of museum curators in France, considering the importance of the objects of arts or decoration targeted, the recommendations related to the restitution of the scientific works have caused real frustrations among a large number of African scholars and intellectuals. The obvious cautiousness with which the authors of the report have dealt with the issue of the repatriation of the Oumarian library, described as a "collection of manuscripts", is quite surprising. The proposal of its digitization for sharing, instead of the restitution of the full original version, is difficult to understand. One should know that the scientific works mobilize the family of El Hadj Oumar El Foutiyyou more than any other piece of the Segou treasure. The former caliph of this family, Thierno Mountaga Tall, had travelled to France many times, from 1993 to his death in 2007, to claim, in vain, the restitution of the manuscripts. Finally, he decided to sell the microfilms they wanted to buy him. This is why the hesitation of the authors of the report concerning the scientific works is worrying. This apprehension is all the more justified as the authors of the report are aware of the high tension provoked by the promise of Nicolas Sarkozy to return to South Korea their 300 manuscripts. This would have pushed them to limit the scope of their intervention to museum objects only. 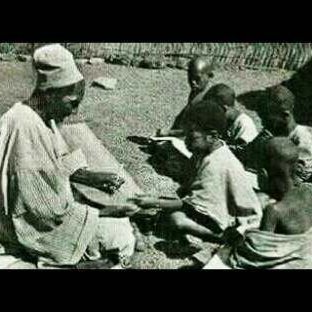 The importance of the Oumarian library
Mister President,
Cheikhou Oumar is presented in historical representations, especially that of Western, as a violent swordsman, guided all time by a desire of political power, an ambition to build a "toucouleur empire". The willingness to sign a deposit agreement of a sword found in Ségou 26 years after the disappearance of Cheikhou Oumar that the colonizer, who has never fought against him in this region,  attributes to him, forms part of this propaganda. Their intention would have been perceived without any suspicion and the reception in pomp better appreciated, if they had restored, even temporarily, some of his manuscripts in the place of this sword made in France.   It is undeniable that Cheikhou Oumar dedicated his life to Islam and fought to spread it in West Africa. However, mustn’t we also remember that he has took the humanism of this religion to a higher level as a great intellectual ? The Ségou library, a collection of 578 works in the middle of the 19th century, proves how he was eager for knowledge and fond of science. A man the most part of whose life was devoted to the quest of knowledge and its dissemination. The holy war took only thirteen years of his life which lasted seventy rainy seasons. About twenty manuscripts were written from his own hands. The bibliography of "Rimaahu Hizbu El Rahiim alaa Nuhuuri Hizbu El Rajiim", his flagship work, has no less than hundred references. This document was published by the Tunisian State in 1878 with an explicit West African signature: El foutiyyou, El Tooriyyou. He thus forms part of the first West-African authors, all languages considered, to have been published. This publication followed the request of the son of Aliw Tammasiniy, the calif of Tidjane brotherhood, and Tunisian Ulemas who feared the deterioration of the manuscript as a result of the numerous consultations. He was fond of writing and reading. He was surrounded by erudite bearers of feathers who made it possible for posterity to know his actions and accomplishments. Mamadou Aliou Thiam, Lamine Maabo Gisse and Mamadou Mahmoudou Ka, described his exile and fightings by writing it in fulani language, pular. Thus, Segou, with his Ulemas and his library which counted several hundred works, was an Oumarian cultural capital, a canter of scientific excellence. This is why the " Archinard Fund" (term challenged by historians) of François Mitterrand Library is the meeting place of a large number of researchers in Islam and africanists.

Restitution of the original Oumarian library
Mister President,
Given the importance of scientific works in African cultural and intellectual heritage, Given the limited accessibility of Europe to Africans, knowing what Cheikou Oumar represents today in the world, considering the will of President Emmanuel Macron to return to Africa its spoliated objects, In order to facilitate access to primary sources in history to African researchers, we would be grateful to your Excellency to carry the strong expectations of researchers clearly expressed in these terms :
May France want to restitute to Senegal undiminished the Oumarian library in priority!

To your Excellency, Mister President, the expression of our highest consideration.

By signing, I authorize Baajoordo Research Center on African Intellectual Heritage to hand over my signature to those who have power on this issue.