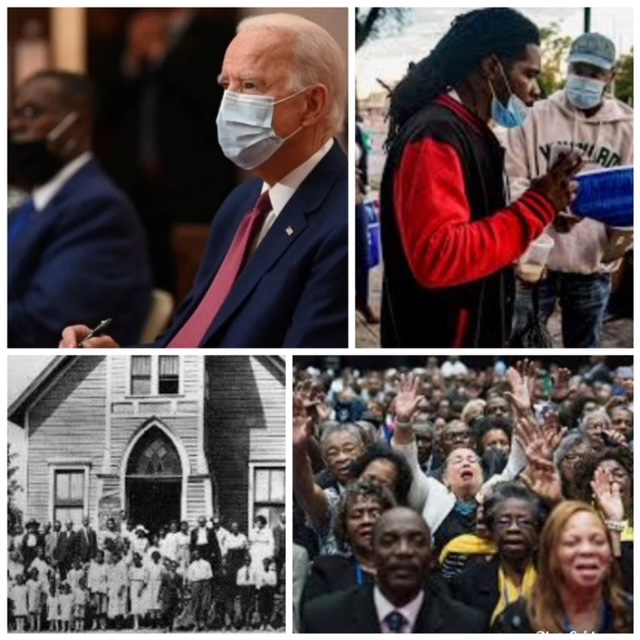 We, the undersigned faith leaders and Kingdom builders of America, who pastor a flock of more than 30 million African American citizens, affix our names to this petition as representatives and spokespersons for a community that has been given short shrift for far too long, and that has been disproportionately affected by the ravages of the coronavirus, both in terms of lost lives and economic devastation.

As signatories to this petition, we are asserting that the communities we represent speak with one voice, in full accord, from coast-to-coast, in all states, across a diverse landscape of faith traditions.  Never before has a group as large and diverse as this one, forged a union as strong as this one, to make a simple and clear demand of the legislative and administrative authorities of the United States of America, many of whom have the fealty and iron determination to vote, despite extreme voter suppression efforts, of our African American congregants to thank for their elected or appointed political positions.

In May of 2020, Congress passed the HEROES Act to give financial assistance to those hardest hit by the economic recession caused by the pandemic, and the necessary measures that have been taken to curb its lethal spread. For reasons that can only be known to his maker, Senator McConnell has refused to put the HEROES Act to a vote, and has recalcitrantly refused to allow financial help to the hardest hit cities and municipalities.  As of the date of this petition, no new relief has been provided to the American people since the passing of the CARES Act in March of 2020, and for far too many people, the situation is now desperate.

The African American community has been decimated by the political loggerheads in Congress and the lack of financial support for those who have lost employment or revenue through no fault of their own. Black businesses and churches have been especially impacted by the decrease in economic buying power of the Black community. Although some enterprises were able to take advantage of the PPP loans and state-based assistance, what all businesses need now is not more loans, but customers with discretionary income to spend in their establishments.  America has tried top-down stimulus.  It was only marginally effective, and far too much disappeared into corporate coffers while working and struggling people were buoyed for only a very short period of time.

We, the undersigned, are demanding a different approach to stimulus for our congregants and for the millions of Americans desperately in need of financial help to take care of basic needs.  Furthermore, we the undersigned, state and assert that bottom-up stimulus will flood our communities with the cash needed by our people to spend in, and thus save, our small businesses and enterprises. We cannot keep using band-aids to save a hemorrhaging patient. Our people need support that is predictable, stabilizing, sustaining and significant enough to allow them to spend in the economy without fear of want. To that end, we are making the following ask:

Direct stimulus payments of not less than $1,200/month for a period of 6 months for every adult making up to $100,000/year, to be paid by electronic bank transfer, paper check or prepaid debit card.

People will be eligible for payments whether or not they are employed, and irrespective of whether or not they are a dependent of someone else or have dependents of their own. We do not seek to sit in judgment of who is or is not worthy of assistance from the government.  These payments are functionally a tool.  The more people who have that tool, the more people will be able to drive economic activity and to participate in it themselves.  It is not for us to decide how best to spend the money.  The people will choose what is best for them and their families.

Those who say we cannot afford to provide this immediate, measurable and vital relief to our citizens are simply incorrect. Our proposal is well within the overall cost parameters of previous stimulus proposals, such as the HEROES Act, and is a fraction of the cost of the CARES Act. Therefore, we will not be moved by arguments that America cannot afford to spend that kind of money on her citizens. The opposite is true.  America cannot afford NOT TO.

We fully understand and expect that there will be some who object on philosophical grounds to the idea of government giving citizens money directly.  The time for philosophical objections has long passed. The suffering and struggle of the American people needs immediate redress.  As with the coronavirus itself, we must do whatever it takes to salvage our beautiful nation and her amazing and enterprising citizens.

We are men and women of God, who teach and lead others in the ways of Christ.  We are leaders who carry the mantle and yolk of responsibility in taking care of and serving our flock.  We have reflected, we have researched and we have prayed for guidance from our God in taking this bold step.  We are of one accord.  America needs help, and we simply cannot permit the suffering to carry on without visible and forceful intercession.

In the days ahead, we will be meeting with Congressional leadership, representatives from the Biden Administration, and other stake-holders to parlay and negotiate the fastest and most effective way to provide the stimulus outlined herein to the people. But let it be clear that we will not be naysaid.  President-elect Biden and Vice-President-elect Harris assertively stated that they will remain cognizant of the needs of the African American community.  President-Elect Biden has recently said verbatim that he "has our back." We believe him.  And this is how he can show himself to be the compassionate, thoughtful, practical, God-fearing and honest man of his word that we know him to be.

This petition is an entreaty on behalf of the Black Community, but it seeks to ameliorate conditions for all Americans because we believe that we are all God’s children, and that we can abide the suffering of no one without falling short of His commands. The American people need help, and we will do everything in our power to make sure they get it.

Pamela M. Keith, Esq.    Contact the author of the petition

By signing, I authorize Pamela M. Keith, Esq. to hand over my signature to those who have power on this issue.