Petition to deny the rezoning of the property located at the corner of Falcon Ridge Parkway and Conestoga Parkway. Anthem Sun City case no. ZCM-21-004B and TM-21-007

We the residents and homeowners of Sun City Mesquite respectfully request that the Mesquite City Council vote NO on Case no. ZCM-21-004B and revise TM-21-007 to remove the Rec 2 AR-CR1, the requests to rezone the property located at the corner of Falcon Ridge Parkway and Conestoga Parkway from Residential to Commercial Residential.

This rezoning would result in the building of 16 pickle ball courts and 1 basketball court, as well as a parking lot and lights, resulting in undue stress on the surrounding residents from light pollution and noise pollution of 70 decibels per court. These courts would be available for use from dawn until late evening every day, with additional traffic and noise from a PA (loudspeaker) system when the Pickle Ball Club hosts tournaments. The close proximity to our homes will undoubtedly result in the devaluation of our properties.

This rezoning issue has caused many conflicts among the residents of Sun City because the developer, Pulte Homes, has circumvented the residents most affected, and presented this as a fait accompli, and only presented it to a select few, but not all, of the local residents, via a Zoom call, disregarding the majority of the Sun City residents. However, the Pickle Ball Club has had a huge amount of interaction with the developer over the years.

The Official Notice of Public Hearing letters that the City of Mesquite sent out, calls this area the, “New Rec Center 2 site”. However, the Pulte representative made it clear to those of us that that were on the Zoom call that no Rec Center building or pool would be built on this property, as there is not enough land to accommodate a building. We see this as misleading. Pickle ball courts are not a Rec Center.

We are not averse to additional pickle ball courts, however, we feel that there are other areas that are already zoned CR-1, where the pickle ball courts could be built, that would not disrupt existing homeowners who bought their homes, many paying lot premiums of $100,000+, with the promise of being surrounded by peaceful, serene and aesthetic residential dwellings.

We, the undersigned, appreciate your careful consideration to deny the request for rezoning this property and keep the original Master Plan, which does not adversely affect any current residents and allows Pulte Homes to build homes and recreational facilities as originally planned. 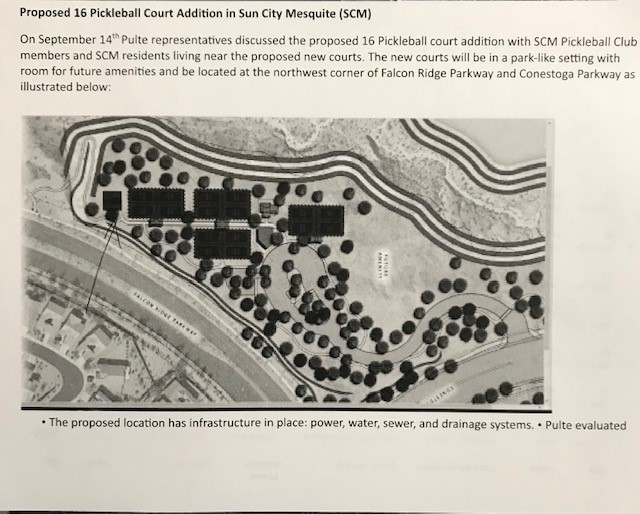 By signing, I authorize Concerned Homeowners of Sun City Mesquite to hand over the information I provide on this form to those who have power on this issue.