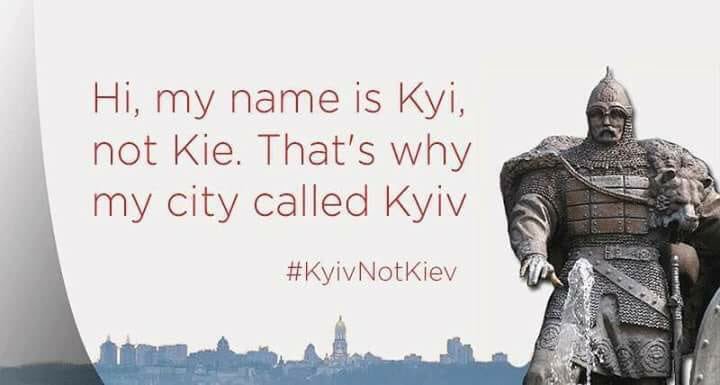 In accordance with the 10th United Nations Conference on the Standardization of Geographical Names, we, the signatories to this petition, politely and urgently request your media organisation  to immediately abandon your usage of outdated, Soviet-era placenames when referring to Ukraine.

Ukraine has been an independent sovereign nation for more than 27-years.  Notwithstanding, the Soviet-era versions of many geographic names stubbornly persist in international practice, largely due to media organisations like your refusing to abandon archaic place names. The transliterations of the names of cities, regions and rivers from the Cyrillic alphabet into Latin are often mistakenly based on the Russian form of the name, not the Ukrainian.

The most misspelled names and mis-uses are:

Under the Russian empire, and later the Union of Soviet Socialist Republics (USSR), Russification was actively used as an oppressive tool to extinguish each constituent country’s national identity, culture and language.  In light of Russia’s war of aggression against Ukraine, its illegal occupation of Crimea, which has been condemned by Ireland, the European Union and the United Nations, the media’s continued use of Russified placenames only furthers Russian efforts to assert ownership over sovereign territories, to destabilize them and delegitimise them, such as is occurring in Ukraine. You will appreciate, we hope, how the use of Soviet-era placenames – rooted in the Russian language – is especially painful and unacceptable to the people of Ukraine who are suffering an illegal war and occupation of its homeland.

To help avoid these mistakes, and be accurate in your reporting, we refer your organisation to Resolution X/9. Romanization of Ukrainian geographical names adopted by the 10th UN Conference on the Standardization of Geographical Names, at page .27, which recommends the “Romanization system in Ukraine” as the international system for the transliterations of Ukrainian geographical names.  Ireland supported this Resolution, and it was passed by the UN, making it difficult to understand why media organisations such as your continue in archaic, highly politically charged Russified usage of placenames.

We further note that while enduring with Russified placenames more than 27 years after Ukrainian independence, your organisation showed cultural and legal deference to other nations/peoples by quickly adopting their change of place names such as Bangladesh to Myanmar; Bombay to Mumbai; Peking to Beijing and others.

It is time for your organisation to join modernity and abandon the use of Russified placenames in Ukraine and other post-Soviet nations.

By signing, I authorize Miceál O'Hurley to hand over the information I provide on this form to those who have power on this issue.