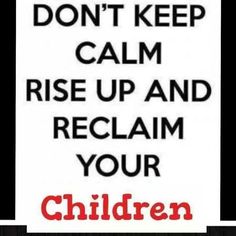 Bill 89 affirms Ms. Wynne’s belief that children belong to the State, not to their parents. During her term of office, she has done everything in her power to separate the children from their natural family.

Premier Wynne previously forced children to submit to her personal sexual values by forcing a shocking sex-education curriculum on all the children in this province. She is now extending her reach by taking control of the unfortunate children brought under the supervision of Children’s Aid Societies (CAS).  In doing so she is targeting the traditional family and its values.

Bill 89 was introduced in the Ontario legislature just before Christmas break. It is entitled Supporting Children, Youth and Families Act, 2016 and replaces the Child and Family Services Act dealing with child protection, foster care and adoption.

There are deep concerns about this bill.

It appears to effectively give wide jurisdiction to the State to control the lives of children in the CAS, and in doing so, interfere with the parent/child relationship. This occurs by defining the “best interests of the child” so broadly as to include: the child’s physical, emotional, mental and developmental needs, as well as the child’s race, ancestry, place of origin, colour, ethnic origin, citizenship, family diversity, disability, creed, sex, sexual orientation, gender identity, and gender expression.

That is, these broad sweeping provisions in the legislation make every family vulnerable to the removal of their children from their home on the basis of the ambiguous provisions listed in the bill as defined by the government, especially by regulations, which require no public debate or approval by the legislature.

For example, this proposed legislation permits the CAS to withdraw a child from its family if it is determined the child is likely to suffer emotional or mental harm, or for a parent’s failure to provide the child with services or treatment. If a child decides he/she is of a gender other than his/her biological gender, the parents are required by this legislation to provide transgender medical services to the child or risk the child being removed from the home.

The reality, too, is that many children do resist parental direction as a part of the growing up process. As a result they may experience “mental and emotional” discomfort when their parents insist that they do as instructed.  This parent/child conflict could, under provisions of the bill, lead to the removal of the child from the home.

Unlike the previous Act, a child’s religion is no longer a factor to be considered in determining the child’s best interest. That is, “religious faith” has been removed at nearly every reference contained in the previous Act.  No longer can parents direct their child’s religion, but rather it is the “child’s creed” that is to be taken into consideration when determining the needs of a child.   This provision will create conflict within the family over such issues as abortion, gender identity or even assisted suicide if the child decides that is what he/she wishes.

This proposed legislation is a nightmare waiting to happen.

Further, under this proposed legislation, CAS is required to “consult with the child” in accordance to his/her age and maturity. The legislation lists in detail, in Part II of the Bill (s.3 to s. 14), the rights of the child, but provides no balancing provisions outlining the rights of a parent.

Although the proposed legislation does state [s. 2(1) and s.5] that the legislation is intended to “build on the strength of the family”, and s.13 provides that the child or young person and “their parents” have an opportunity “to be heard” and represented when decisions about the child are made by the CAS, this is scarcely an adequate substitute for the common law rights of a parent in regards to a child.

Children, of course, need to be protected from genuine abuse, but this proposed legislation is an open door for the State, rather that the parents, to control the child’s destiny, and, to mold the child in accordance with the State’s ideology.

Alarmingly, Bill 89 also extends the jurisdiction of the State by permitting the Minister to issue a compliance order for the CAS to comply with the legislation and regulations.

Should a Society fail to comply with the compliance order of the Minister, the latter may appoint or replace the members of the Board of Directors of the CAS and also replace the Society’s Chair, and appoint a supervisor to operate the Society.

In other words the State insists that its views will be implemented without the consent or approval of the elected directors of the CAS.

This completely overturns the responsibilities of a CAS, which previously had always been a part of the community in which the child is living.   Individuals interested in the welfare of children become members of the Society and they elect, from among themselves, a Board of Directors who determine policy and hire employees who would reflect their community and its values.   Under Bill 89, the Board of Directors is to be a mere rubberstamp for the ideological views of the government with the exception of the First Nations, Inuit and Métis communities.

This bill is a control over the traditional natural family and usurps the responsibility of the parents to raise their children according to their own values.

Gwen Landolt, vice president of REAL Women of Canada, echoes these concerns.
If Bill 89 passes, “the state can move in and take the child away in the ‘best interest of the child’ and the best interests includes gender ideology,” Landolt, a lawyer, told LifeSiteNews.
Landolt, who was on a Children’s Aid Society board for 11 years, said under current legislation, the religion of the parents is “paramount” in decisions made by child protection services.
With Bill 89, that’s “being waived, and the minister can make these decisions,” she said. That could included a decision to grant a child’s request for an abortion, or assisted suicide.
“What you’ve got is government controlling the family,” Landolt observed.
The bill “is a reflection of the lesbian premier” Kathleen Wynne “who doesn’t think much of the family, who thinks the state should be in control of children, with her sex education,” she said.
“It’s a reflection of her ideology, but not that of the rank and file parents.”

Expose CAS Ontario    Contact the author of the petition

By signing, I authorize Expose CAS Ontario to hand over the information I provide on this form to those who have power on this issue.