Stop Drugging Dr. Wang and Let The Case Go On

Stop Drugging Dr. Wang And Let The Case Go On

Dr. Lishan Wang, a father of three, was fired from Kingsbrook Jewish Medical Center in New York in 2008, the time for Dr. Wang to finish his 3 years resident was only six months away. He was charged in Dr. Vajinder Toor 's shooting death since 2010 and acted as his own attorney (pro se) for  all the duties and responsibilities in the case.

Dr. Wang has neither a history of mental illness nor family history. However, during the pretrial discovery in 2015, when Dr. Wang requested the internal documents from Kingsbrook Jewish Medical Center regarding to the alleged covering up malpractice[1], wrongful termination, and defamation[2] etc.,  Thomas Ullmann, New Haven Chief Public Defender (a Jewish American),  suddenly came out to represent Dr. Wang without Dr. Wang’s consent.  Dr. Wang was soon diagnosed as “incompetent” and was deprived his right to be a pro se. The coming hearing on November 18, 2015 will decide whether to force Dr. Wang to take antipsychotic medications.

Does the antipsychotic drug compromise Dr. Wang's mental status and capability to testify the witnesses at the trial? If so, do they attempt to prevent the malpractice from being discovered?

Will Dr. Wang become to agree to give up his right of pro se after inject drug?  Can anti-psychotic drugs cause brain damage? If so, Dr. Wang’s deposition may become inadmissible, how can the case have a fair trial?

Please sign your name to this petition to let Judge Thomas V. O’Keefe know that it will be irreversible mistake if forcing Dr. Wang to take medication. 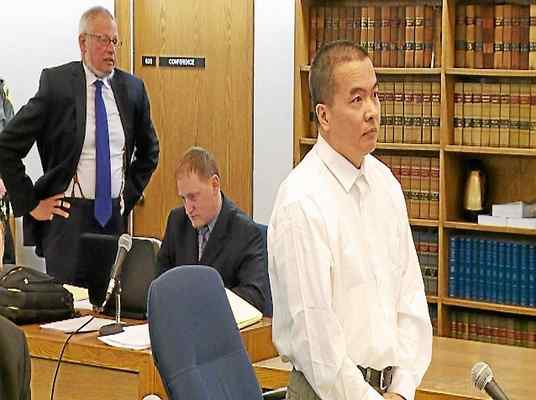 [1] The malpractice reported by Dr. Wang when he was working in Kingsbrook Jewish Medical Center: A guidewire  was shown at a location of Superior or inferior Vena Cava and caused a patient death. (see the evidence http://yeyeclub.com/data/ attachment/album/201312/04/ 095837omu545ggog959469.jpg)

[2] The alleged defamation includes that Kingsbrook Jewish Medical Center accused Dr. Wang "using a pen and poking him in the eye", However, Dr. Toor’s email stated that “he [Dr. Wang] pointed his fingers in to my eyes” (see the evidence http://yeyeclub.com/data/ attachment/album/201511/11/ 084129d6tckk5tk9wqitzi.jpg ). This defamatory “pen” had been pervasively appeared in New York Times, New York Post etc., in order to justfy the alleged wrongful termination.

American Justice Group    Contact the author of the petition