Given the current state of affairs in Kill Shot Bravo (KSB), we are attempting to gauge the level of discontent or unhappiness amongst the players. On a weekly basis, Hothead Games (HHG) has either implemented or removed some aspect of the game which only benefits them financially. Recently, the only move we've seen to help the KSB community as a whole were the elimination of mod apks back in early April. While this change was appreciated, frankly it was 10 months overdue. It's the responsibility of the developers of the game to maintain a quality product.

In recent months, HHG's has come out with gear that arguably has misleading percentages on the amount of damage it would cause (based on base damage). Subsequently, they placed this gear in the PVP Gauntlet crates which required 20 attempts or 1,000-2,000 gold to obtain one piece of gear. They have since been moved into the regular crates which cost 100 gold per spin but you have the possibility of obtaining more than one piece.

This is just one example at the endless practice that has come to be known as "gold grabbing." There will be more examples to follow below.

Furthermore, HHG's has come out with new holiday weapons which are very expensive to buy and upgrade. The R24 weapons were not able to be used in a viable event like AWAR before they came out with R25 weapons. In addition, upgrades to the weapons have increased and the amount of time that it takes to upgrade the weapons has been increased as well.

By HHG's own numbers, if you were to buy the game cash needed to upgrade all four R24 Holiday Crate Guns (50+ million game dollars) it would cost you over $45,000 USD (real money)!!!  That in itself is nothing short of criminal to say the least.    **See illustration below. 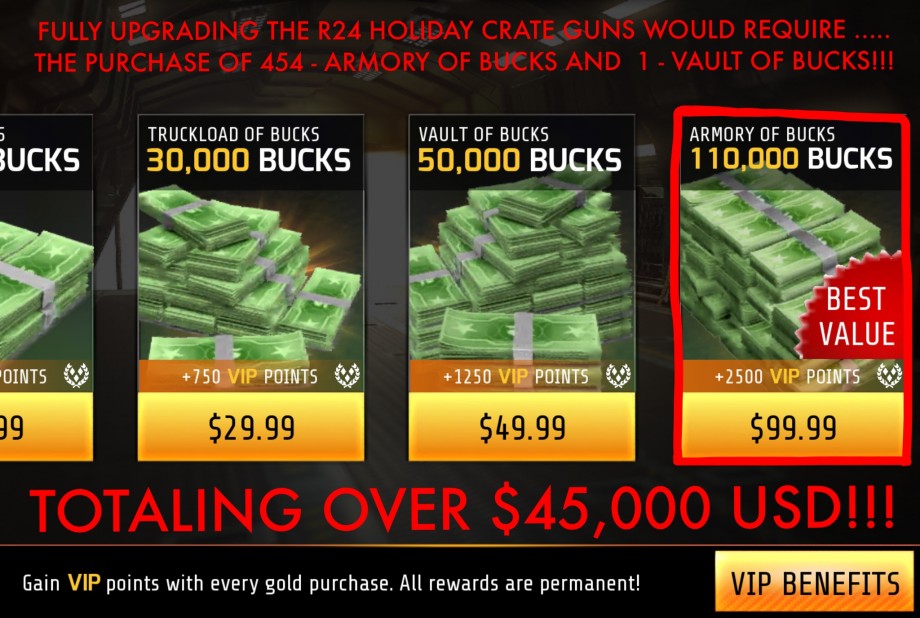 One could also make the argument that by increasing the amount of time needed to upgrade the weapons before an event, it forces players to spend gold on upgrading weapons rather than game cash in order to have the weapons fully ready for the next event. In the boycott last summer, didn't HHG agree to space out the release of future weapons in their concessions?

Next, there were the launch of the newest Whiteout, Aegis, and Zombie 6x weapons in 2017.  HHG would release these new 6x weapons at the beginning of the week for direct purchase with a countdown timer indicating they would disappear after that timer ran out. In reality, the timer would run out and the 6x guns then became available on sale. Those who purchased the weapons a few days earlier lost approximately 1,000 gold. When customers emailed HH support, they were told they will not refund the difference in gold.

Most recently, we saw HHG's reduce the power ups reward on platinum bounties from 6 slo mo/6 armor bullets to 3 slo mo / 3 armor bullets for Raid bounties. One could make the argument that platinum tagging is cutting into their power up sales so this change makes players spend twice the energy to get 6 power-ups (which used to only require one energy for most people with adequate weapons). From watching chatrooms, this has been an enormous point of contention and players seem beyond disgusted.

As previously stated, everything implemented or removed from the game in recent months has been to benefit HH financially. This "perceived apathy" toward their hard-working customer base has generated a lot of outrage.

When we receive enough online signatures for this petition and spur enough in game interest regarding this matter, we will be taking it to the next level with Hothead Games in an effort to make this game affordable and fun again for everyone.

This is to be taken seriously.  There is a large majority of players that have spent an insane amount of real money on this highly addictive FPS game.  See VIP Table of Insanity below.

*these figures represent the beginning of each level.

The only difference in a revolution and a rebellion is whether you win or lose...

And no matter how you see it, the minute "concessions" promised and somewhat implemented in the last boycott were merely a means to an end for HHG to successfully quell the player led rebellion and prevent a more costly revolution that would have undoubtedly affected their $$ bottom line.

Thank you in advance for your time and consideration regarding this extremely important matter.

Intel / ES Bodie    Contact the author of the petition

By signing, I authorize Intel / ES Bodie to hand over the information I provide on this form to those who have power on this issue.