The new EU member state Cyprus has become a death trap for the birds which migrate across the Eastern Mediterranean. Countless trappers set up their nets, and above all lime sticks, in almond and olive groves, in gardens and in the macchia in order to trap migrant song birds resting on passage. The main victims of the lime sticks are warblers and thrushes; but cuckoos, owls and other protected birds are also caught. The trapped birds are destined for the pot, not infrequently in restaurants, where they are sold at a high price as delicacies.

Bird trapping has long been banned on the island – the relevant legislation was indeed tightened up on accession to the EU in 2004 – but the poachers are unimpressed and continue to break the law. Some offenders scarcely bother to conceal their trapping sites, not least because large sections of the rural population have little awareness of their wrongdoing. The police and other agencies are not idle; but they do not have enough personnel to effectively combat poaching. 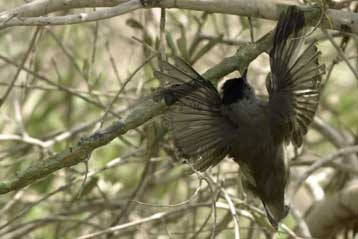