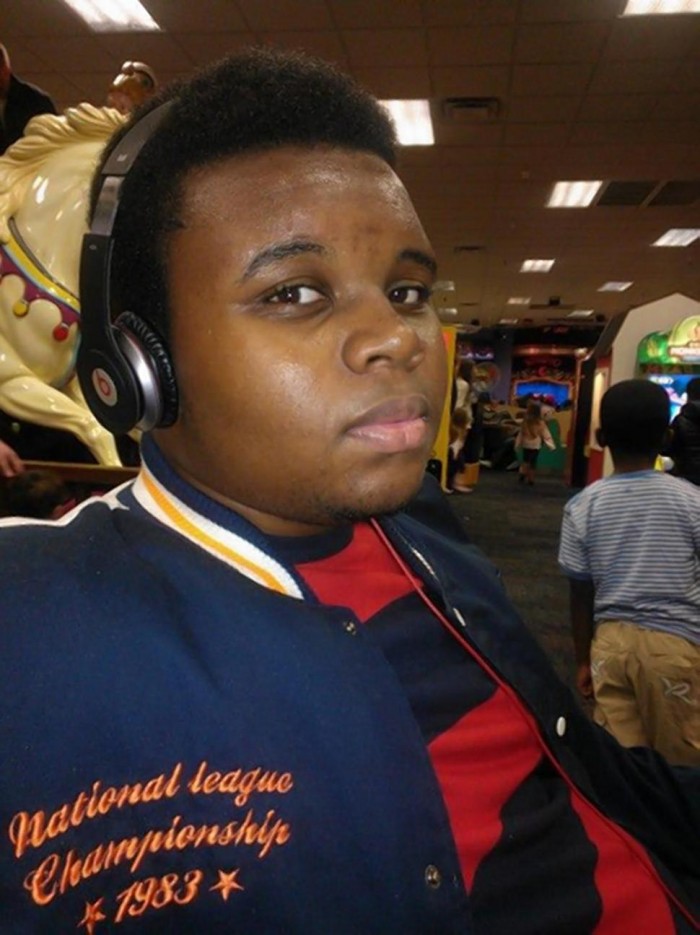 We are proposing that a New Law be enforced entitled, THE MIKE BROWN ACT. This Law shall make certain all current provisions under US Constitutional Rights, Civil Rights, and Color of Law are thoroughly regarded with no remorse. In addition to subject to suit for Civil Rights Violations as ruled under the above mentioned Laws, THE MIKE BROWN ACT shall further implement the immediate suspension of any person of Law enforcement, including Police officers, Agents, and other governed officials in the event of any violation subject to direct harm or death, and be subject to prison or incarceration based upon the deliberation and extent of the crime. The following Provisions shall be enforced ;  Law enforcement shall Not arrest any citizen or person without reasonable cause, warrant, or Direct order to serve. Law enforcement shall Not raid or attack any citizen or person not posing a Direct threat or initiating harm. Law enforcement Shall act within the Boundaries of the Law at all times, and shall Not randomly stop or harass any citizen or person in regards to their own assumption, personal  avenge,  discrimination, or gain. Law enforcement shall perform all Duties within guideline, with no exceptions to excuse The Law and Rights of Citizens. Without a warrant for arrest, Eye Witness, Substantial evidence, or known violation of The Law, No Officer should unlawfully arrest, disturb, harass, threaten, harm, or bribe any citizen or person. Law Enforcement in place to Serve, provide, and protect shall Not at any time fire a weapon at an unarmed suspect , anyone not posing a direct threat, or who is surrendering for arrest. Law enforcement shall not reserve any right to harm, attack, or physically abuse any citizen or person other than proper restraint during an arrest, questioning, or custody hold unless there is a direct threat in pursuit caused for self defense or public protection.  The MIKE BROWN ACT stands against Police Brutality and Citizen’s harassment, Unlawful arrests, Discrimination, Mistaken Identity, Bribery, and Unjust homicides.  We are hoping to have the cries of this injustice heard and Change fulfilled for the future and security of our Communities. 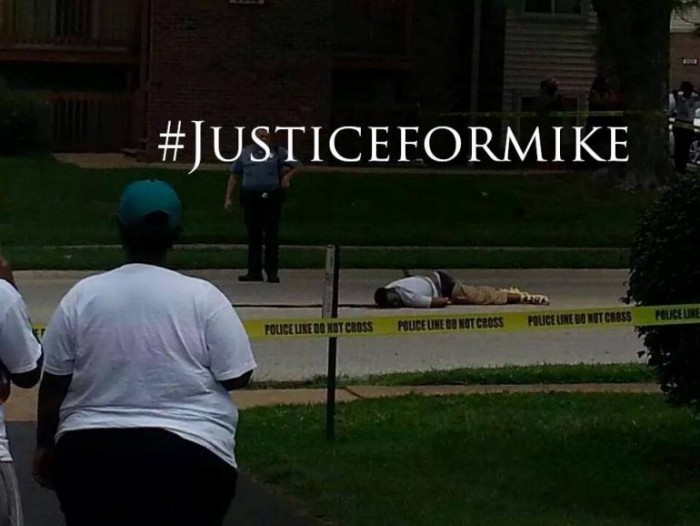 Mike Brown was an 18 year old Male walking from the store with a friend, who was approached by a Ferguson Police Officer in assumption of suspect and Shot Multiple times. His body lay in the street for several hours as Police control witnesses, neighbors, and protesters. In rage against the Injust Homicide, just one of the many acts of discrimination thousands know all too well, St. Louis, Mo. County and City citizens join to Demand Justice. There was no reason to shoot the unarmed teenager who was surrendering with his hands in the air. The town is more irrate, that even with strong witnesses, The Officer has released a false statement in attempt to justify his actions. He claims that Mike Brown pushed him into his vehicle and tried reaching for his weapon. Suppose there was some truth to that.....Why is it that The Officer has not said how it led up to the so-called attack, nor why he stopped him in the first place, or even why,  if Mike surrendered after the struggle- he still shot him 8 times or more? All the shell casings are from the officer's weapon only. Mike was unarmed, and simply returning from the store. The story makes no sense at all. It is Murder, and it is Injustice. We cannot allow Police to attack, harass, and kill our children and get away with it. Law Enforcement is suppose to Serve, Provide, and Protect.

When an individual government official, or other person acting under color of law, violates one's civil rights, such a violation may give rise to civil liability, under 42 U.S.C. § 1983. This statute allows a person to sue that individual -- and perhaps his government-employer in certain circumstances -- for money damages. Additionally, if successful on a civil rights claims, the law allows recovery of attorney's fees, under 42 U.S.C. § 1988.

Misbehavior by a government official or agency may well also give rise to "negligence" type claims. Many states have "governmental immunities" acts, "sovereign immunities" acts, "tort claims" acts, and the like. These statutes often outline the nature and extent of permissible claims against the particular governmental entity at issue -- oftentimes, a government agrees to "waive" immunity in certain situations, thus allowing a private citizen to sue on non-civil rights claims as well. Sometimes the statute will impose a monetary cap on recovery, or prohibit punitive (i.e., "punishment") damages, or require specific notice to be given within a specified period of time in order to permit one to bring such a claim. It is imperative, in every situation that possibly invoves police (or other governmental) liability, that you immediately consult with an attorney to determine the particular type of notice, if any, that must be given to the government. Frequently a failure to give such notice will bar absolutely any claims under the pertinent tort claims/sovereign immunity act.

Sometimes tragedies occur when a person who is incarcerated, whether pre-trial or post-trial, is assaulted by other inmates. Or perhaps an inmate has a particular problem that leads him to take his own life. These acts, too, may give rise to civil claims against government officials. When a government limits or restricts one's ability to act on his own behalf -- thereby creating what is known as a "special relationship" -- the law imposes upon that government the obligation to assume some responsibility for his safety and general well-being. This includes the obligation to provide things such as food, clothing, shelter, medical care and reasonable safety. The United States Supreme Court has repeatedly reaffirmed these obligations.

In U.S. law, the term color of law denotes the “mere semblance of legal right”, the “pretense or appearance of” right; hence, an action done under color of law colors (adjusts) the law to the circumstance, yet said apparently legal action contravenes the law.[1]Under color of authority is a legal phrase used in the United States[2] indicating a person is claiming or implying the acts he or she is committing are related to and legitimized by his or her role as an agent of governmental power, especially if the acts are unlawful.

Color of law refers to an appearance of legal power to act but which may operate in violation of law. For example, though a police officer acts with the "color of law" authority to arrest someone, if such an arrest is made without probable cause the arrest may actually be in violation of law. In other words, just because something is done with the "color of law", that does not mean that the action was lawful. When police act outside their lawful authority and violate the civil rights of a citizen, the FBI is tasked with investigating.[3]

The Supreme Court has interpreted the United States Constitution to construct laws regulating the actions of the law enforcement community. Under "color of law", it is a crime for one or more persons using power given to him or her by a governmental agency (local, state or federal), to willfully deprive or conspire to deprive another person of any right protected by the Constitution or laws of the United States. Criminal acts under color of law include acts within and beyond the bounds or limits of lawful authority. Off-duty conduct may also be covered if official status is asserted in some manner. Color of law may include public officials and non-governmental employees who are not law enforcement officers such as judges, prosecutors, and private security guards.[4] Furthermore, in many states it is unlawful to falsely impersonate a police officer, a federal officer or employee, or any other public official or to use equipment used by law enforcement officers, such as flashing lights or a fake police badge. Possession of a firearm also can enhance the penalty for false impersonation of a police officer.[5]

The Civil Rights Act of 1964 (Pub.L. 88–352, 78 Stat. 241, enacted July 2, 1964) is a landmark piece of civil rights legislation in the United States[5] that outlawed discrimination based on race, color, religion, sex, or national origin.[6] It ended unequal application of voter registration requirements and racial segregation in schools, at the workplace and by facilities that served the general public (known as "public accommodations").

Powers given to enforce the act were initially weak, but were supplemented during later years. Congress asserted its authority to legislate under several different parts of the United States Constitution, principally its power to regulate interstate commerce under Article One (section 8), its duty to guarantee all citizens equal protection of the laws under the Fourteenth Amendment and its duty to protect voting rights under the Fifteenth Amendment. The Act was signed into law by President Lyndon B. Johnson on July 2, 1964, at the White House.