Who can I thank my two-year persecution?! 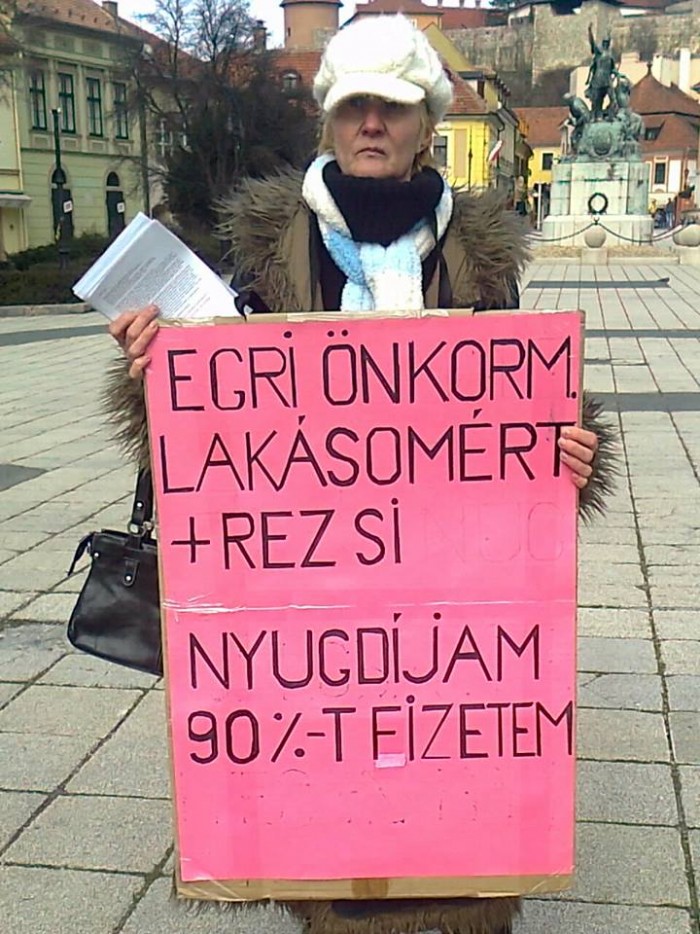 Who can help me? Court, prosecutors, police or the conduct?  No! The public perhaps?

My goal with my protest is to draw the attention of the society, to equal opportunities, equal treatment, against application of double standards. I would also like to shed light upon those whose interest was to airbrush my document regarding my housing from the Government Housing Department in Eger, and to shed light on those who defamed me. So I filed a complaint against an abuse from an unknown perpetrator. There were intentional errors in the police's procedure too, which led the investigation to no result, since they said my case is "left dormant". Practically there was no productive work behind it, no audition of the witnesses and others, etc. Furthermore; my unconcealed will is to solve my case by myself with legal means and frameworks.

In 2007, my husband and I got a cost-based governmental flat from the Municipality of Eger.
The condition to get the apartment was for us to renew it from the bad condition that it was in. I took bank loan on my name to finance this work.
Because of my husband's drinker lifestyle, I could not afford financially to take it any longer, so our community life degraded. In mid August 2009 he intimidated me life-threateningly for me to leave the flat, and he said that he was the one to resolves this housing for us - what is actually true, but he did not give a penny into the occupancy fee or into the renovation cost. The intimidation consisted of two parts; one that he will hire someone to kill me, and that he either will push me out of the window from the 4th floor. I told him that this will be known. I got the answer that he will resolve it to appear it's my fault since I live on medicines. Beforehand I lived on painkillers, so I felt badly. After the threat I immediately moved with all my stuff to a rented a room, and on 25 August 2009 I started to file the divorce. I could file my complaint against my husband after a year on the Precinct of Eger. The case against him was dropped for lack of evidence. My divorce took almost one and a half year, until then he had accumulated a debt on the common apartment alone. He did not pay the rent, the district heating and the gas on this period of time.
Since he did not work, he confirmed with false witnesses that he "is working in three places". The Eger district court accepted this as fact, and gave a provision that whoever can pay 1,2 million forints to the other, can stay. This was my husband's request to the judge. The judge assumed that my unemployed husband can pay me 1,2 million forints. Of course I couldn't pay as well. Despite this he got evicted in May 2011, because from the beginning of my move he did not pay neither the rent nor the public bills, so he stacked up a debt of a sum of around 700 000 forints.

A year later I submitted the mentioned petition, but again it was refused. Then came the Libel and Slander. They came with that they saw me with suitcases, and that I'm a cloth merchant. I indeed carried clothes, but to the Home of Children in donation. I asked them to certify this. Months later I learned, that this was not enough for the local government, on phone they particularly asked about the clothes.
The Administrator of the Eger Holding Company personally came to visit the flat last summer, and she brought up that there is little furniture in my apartment, so "I do not live there habitually". So, from the few furniture around, the conclusion was not that I'm poor, but that I can spend 90% of my pension on a flat in which I don't live in. Where did they get the information from? From my "benevolent-ones"?!

After more than a year has passed since I asked the local government repeatedly for a social easing, they denied it on the basis of gossip level information. So I requested a smaller, but cost-based social housing to be determined. Months later, to my interest, they said I won't be able to resolve this anyway. The Family Support staff, in place to help, he said, "it would be better to leave Eger". I asked for assistance from a Government representative, but he found my case so complicated, that he could not meaningfully help!

Then, I saw no other solution than to protest on Dobo Square, on 24. to 25. May 2013. I walked in one person, up and down with a plaque inscribed "I spend 90% of my pension salary on my public housing rent and overhead charges". To some interested persons I gave flyers, in which I wrote my story. On Monday 25 March 2013 I was also noticed by the Local Government. I was called, I told my problem, and immediately they were helpful. They took action for me to move into a smaller apartment. After I mentioned that I submitted an application in this regard earlier, they looked, but they did not find my paper in the dossier of the Housing Department. Finally, on 1 May 2013 I managed to take possession of my government one-room studio apartment.

To my history belongs that I was in very bad financial and health condition. Only my clothes reminded me that I once lived a better life too. In vain I have attached to the submissions the medical certificates. I could not elicit my medicines with the remaining eleven-few-thousand forints. I requested financial support to be able to buy my medicines. They refused me with: "Those who live in a cost-based apartment, must be able to pay for meds too". So, by the slander of my "well-wishers" they continually assumed that I have plenty of money. My nutrition was shameful, only a narrow circle of friends knew that I often starved. Only my clothes in my closet reminded me to an average prosperity. My other valuables were sold to finance therapy and to buy medicines. Morbid, but now I am taking one medicine for everything. And due to the debt I can only redeem my medications with the help.

This is how I became nobody in Eger city, because according to Fidesz: "you are worth the amount of money you have". I accumulated 5 million, and in plus they owe me 2 million. What I will never see. The remaining clothes remind me of better days I've seen so far.

Unfortunately, the cost-based apartment of the Municipality of Eger was renovated by loan in order for us to move in as soon as possible. This was a precondition to allocate the housing. I had to leave this apartment. I did not get it on social base, but it is true that I got a smaller one, based on the protest. The opinion of others is that I won, but unfortunately I carry the traces of my persecution in a form of disease!

Municipality of Eger on 6 December 2012 at 16:00 o'clock kept a general meeting, where I also told my problem, which was also recorded in Eger Television. And is publicly listed on the protocol created, and can be viewed on their website: http://www.eger.hu/public/uploads/20121206-JKV-kozmeghallgatas_5229abc9593a0.pdf

As typical momentum I can mention, that the employee of the Eger Holding Company, who controls the technical condition of the homes, who kept my husband in that house with a debt of 700 000 forints, and made my life harder based on gossip level information, did not come on the due September 13 2013. technical inspection, her bosses came instead.

To my calumniation the following persons have contributed:

Municipality of Eger. In addition, the Eger Trustee  Ltd. and also the informers.

I ask you respectfully and kindly to support my petition for I would like to receive a legal remedy after two years of disgrace.

Currently Hungarian right-defenders are dealing with my case.