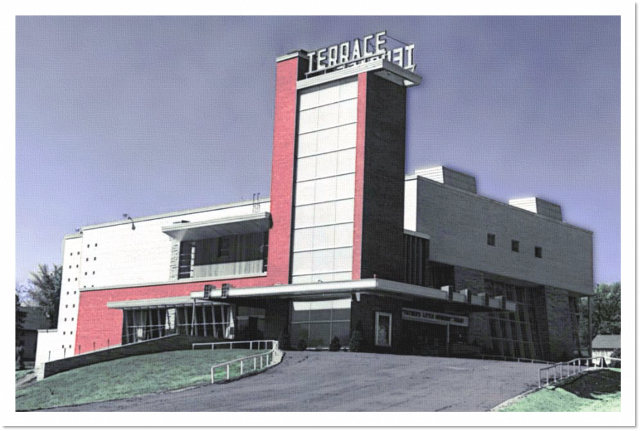 On July 13, 2016, a development plan was unveiled to the public for a redevelopment for the Terrace Mall site on the corner of 36th and France Ave N in Robbinsdale, MN.  In this plan, it was revealed that a 91,500 square foot Hy-Vee store would be built on the site, causing the destruction of the Historic Terrace Theatre.

By signing this petition, I pledge the following:

1.      I support the efforts to restore and reopen the Historic Terrace Theatre.

2.      I believe that the proposal, as stated, shows Hy-Vee’s lack of respect both for the community that they are entering, as well as the importance of historical landmarks and their effect on the community.

3.      If the theater is demolished, I pledge to not shop at any Hy-Vee location, and will encourage those I associate with to do the same.

Designed by the nationally renowned architectural firm of Liebenberg and Kaplan, the Terrace opened on May 23, 1951, and was considered by many as the pinnacle of an already illustrious career for this firm.  It was the first movie palace to be opened in the Twin Cities suburban area since the end of World War II, and one of the first ultra-modern theaters in the country.  With innovative features such as a sunken lobby, 57 foot tall marquee tower, smoking room, and television room, the Terrace was quickly visited by people from around the country, hoping to replicate parts of the theater in their own hometowns.

Unfortunately, the theater closed in 1999, and has been abandoned ever since.  Several efforts have been made to purchase the theater over the years, but have been met with a resistant landowner, only interested in selling the theater if the buyer also took the adjoining mall complex.  A local preservation group, Save the Historic Terrace Theatre, has received notification that the Terrace is eligible to be listed on the National Registry of Historic Places, and is now working with Preservation Design Works to accomplish that.  The application is expected to be submitted Fall 2016.

Now Hy-Vee seeks to tear down this masterpiece of Mid-Century design, and the adjoining mall complex, in order to build an even larger grocery store than the previous one that occupied this area.  In response to questions at the open house, Hy-Vee representative Phil Hoye stated the following, highlighting their lack of dedication to the community they want to invade:

1.      The store needs to be the size it is because that is the size they build their stores.  They are unwilling to consider a smaller store that could exist with the theater.  Hy-Vee is unwilling to look at a repositioning of the store on the large property to allow for both to exist because it wasn’t “financially feasible” for them.

2.      It is not their concern how their big box grocery store would affect the locally owned business that make up the majority of Robbinsdale.

3.      Their new employees will be made up of “people who want jobs”, without looking at the local unemployment rate, or how many local businesses might lose their own employees.

4.      When asked if Hy-Vee was concerned over the public reaction to tearing down a building that will be listed on the National Registry of Historic Places, he stated Hy-Vee was not concerned about this.

Save the Historic Terrace Theatre believes that if Hy-Vee truly cares about local communities and environment, as they claim, they should be willing to work with the preservationists trying to save this landmark, which has been a significant piece of Robbinsdale’s cultural identity for 65 years.